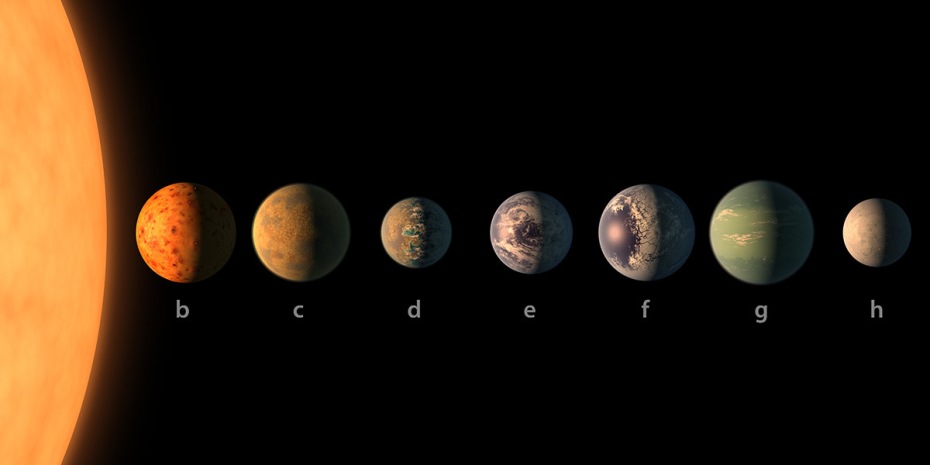 Now that scientists have found seven new planets that might possibly harbor life orbiting a star, Trappist -1, that is “only” 40 light years (or 235 trillion miles) away, science fiction buffs are enthused about new worlds to write about. It doesn’t really take actual new worlds for fiction writers to create whole new societies and species—they’ve been doing that quite nicely with their own imaginations for years. But how nice it is to have actual planets that really exist on which to base speculative fiction. It gives the writing a ring of authority.

One of the nice things about the Trappist-1 discovery is that there isn’t just one planet to study, but a whole host of seven new worlds. One or more of these planets could revolve in just the right temperature range for oceans of water to exist, which most scientists think is essential for any kind of life like ours.

“I think we have made a crucial step toward finding if there is life out there,” Amaury H. M. J. Triaud, and astronomer at the University of Cambridge, England, told the New York Times.

Right now, telescopes on the ground and at the Hubble Space Telescopes in orbit are able to find some of the molecules in the atmosphere of the seven new plants. Later, the James Webb Space Telescope (to be launched next year) will be able to judge infrared wavelengths of light.

All this study will help in the search for life. And even if the planets don’t have life, they will provide new clues about what keeps life from evolving on different worlds.

No matter what the scientists find, fiction writers will have all kinds of fun developing life and societies for the new planets. The worlds orbit  and ulltra-cool dwarf star, which is much different than our own. It has only one-twelfth the mass of the sun and a surface temperature of 4,150 Fahrenheit, much cooler than the 10,000 degrees of our own sun. How will that affect the type of aliens that could live there? Maybe they are furry and have blubber to retain heat. Or maybe they are just smaller, in context with the sun the live under.

Another interesting thing is that the planets are relatively close to each other and are pulled close to the star. Could this mean a civilization develops that is multi-planetary in nature, with denizens hopping from planet to planet with ease?

Writers will be watching the developments of Trappist-1. I wouldn’t be surprised if the first Trappist-1 novels start appearing in the next few years.

I, who don’t write science-fiction but sometimes enjoy it, couldn’t be more excited about this discovery. It means a great deal for our general knowledge of the universe, and for literary art.